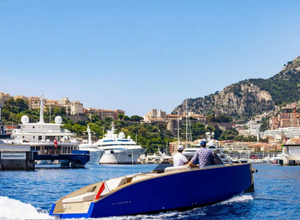 We are honored to have won the prestigious 2021 UIM Environmental Award in recognition of our ongoing commitment to the production of fully electric luxury boats !
This award recognizes outstanding environmental leaders, whether individuals or organizations that have excelled in inspiration, vision, innovation, leadership and initiatives to the benefit of the Environment.
To read more, click here to access the official press release. 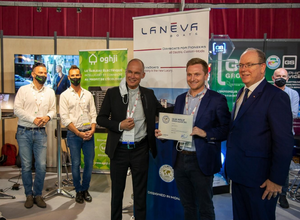 During the 16th edition of EVER Monaco, which took place on May 5, 6 and 7, Lanéva Boats confirmed its presence in the Start Up village and unveiled its new 100% electric boat VESPER. The Ever Monaco Show, a pioneer of events dedicated to sustainable mobility and sustainable energies in the Principality, was an opportunity for Laneva Boats to confirm its commitments, particularly with the Solar Impulse Foundation.

Lanéva Boats was awarded the Solar Impulse Foundation Label on Thursday. Bertrand Piccard created this label as part of his “1000 Solutions for the Planet”. This program is intended to promote innovations that are both profitable and virtuous for the environment. It was an honor to receive the Solar Impulse Label, in person, delivered by Bertrand Piccard and H.S.H. Prince Albert II. 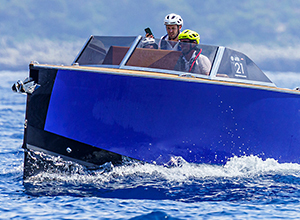 Back on the 5 days of the 8th edition of the Energy Boat Challenge, organized by the Yacht Club of Monaco, in collaboration with the International Motor-boating Union (UIM) and the Prince Albert II of Monaco Foundation. The event was an opportunity to discuss new clean and alternative propulsion systems and to see 32 teams compete, 22 universities with a total of 17 nationalities represented.

An incredible experience, Lanéva finished in 2nd PLACE in the general classification. The Lanéva team is proud to have come first among electric boats running on batteries.

For the other competitions, congratulations to VITA for the 16 nautical mile Monaco-Ventimiglia Roundtrip and to Candela for the speed record. Congratulations also to the TU Delft team for their selflessness!

Congratulations also to the participants of the other classes and in particular to Team UniBoAT (Italy) first in the Energy Class, followed by the Dutch-Monegasque E-Racing Team and the French “Capgemini Engineering” Team. Bravo to the Dutch “Sunflare Solar” team. , who won the Solar Class ahead of Team Swiss Solar and Team HAN Solar Boat.

We also have the honor of meeting Mike Horn, Ambassador of the Yacht Club de Monaco, who came aboard our VESPER and with whom we were able to interact. A unique moment!

We would like to thank the Yacht Club de Monaco for their welcome and for organizing this challenge. It was an honor for Lanéva to represent Monaco during these different events.

Find the official press release of the UIM. 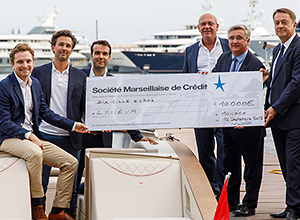 As part of a partnership between Monacotech and the Société Marseillaise de Crédit, groupe Crédit du Nord, Lanéva was rewarded with this new innovation prize.

Awarded for the first time, the objective of this prize is to highlight the innovation developed within the framework of corporate social responsibility practices (CSR).

It was therefore an opportunity to invite a hundred guests to the Yacht Club of Monaco. With the boat Lanéva docked and visible by all participants, many partners and customers of the three entities were found for a cocktail punctuated of speeches. The lucky ones even managed to navigate the port at dusk.

First of all, that of the manager of the bank reminding his attachment to innovation in the Principality, then the director of Monacotech proud of the development of its startups and finally by our team, happy to receive a prize that rewards the long efforts provided since our arrival in the Principality, two years ago.

Lanéva is a Monaco-based company specializing in 100% electric luxury boats and the electric retrofitting of vintage and premium boats.

Lanéva is a story that began 5 years ago. We expl

Each with their own specialty, our employees and p

Behind each of our boats hides a team of engineers

🔗 Throwback to the 2022 edition of the Swiss Bo

🎯 Sustained and passionate exchanges and debate

🎉 What a Swiss Premiere ! We were able to meet