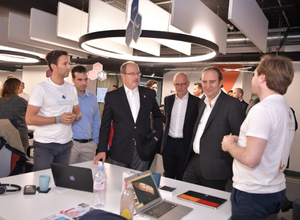 “MonacoTech, the start-up incubator/accelerator created by the Monegasque State, in partnership with Monaco Telecom, has just been inaugurated by H.S.H. the Sovereign Prince, Jean Castellini, Government Counselor – Minister of Finance and the Economy and Xavier Niel. With more than 800m² in open space, including a co-working space, MonacoTech welcomes promising startups from Monaco. »

Remember that the first promotion of 15 startups, including Lanéva, were the result of a drastic selection from the 182 applications received.

The mission of the incubator is to stimulate the culture of entrepreneurship in Monaco and to forge the reputation of the Principality as a major player in specific sectors of innovation. He helps talented teams to create, launch and develop innovative and original solutions. It gives founders the means to transform their passion, their vision and their ideas into an economically viable project.

The first director of MonacoTech is Fabrice Marquet, a Monegasque who returned to the country for this new mission. He is accompanied by Carl Frauenstein, a multi-entrepreneur who leads the support program for startups.

Since January 2020, MonacoTech has been led by Lionel Galfré, former director of the Monegasque Institute for Statistics and Economic Studies.