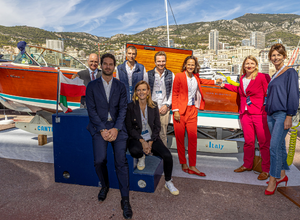 As part of the launch of its new branch, and in particular the first retrofit project of a vintage Riva, Lanéva benefits from the support of the Mission for Energy Transition of the Prince’s government.

Under the impetus of H.S.H. the Sovereign Prince, the Prince’s Government is pursuing a committed energy transition policy which should reduce greenhouse gas emissions by 55% by 2030 compared to 1990. As part of the recovery due to the COVID19 crisis, the Monegasque government is adding a new axis to its Green Fund. The purpose of this Fund is to support any Monegasque company that carries out a project contributing to the energy transition. This boat retrofit project is financially supported by the Prince’s Government via the team of the Mission for Energy Transition (MTE) which leads this Green Fund.

The conversion of a vintage Riva boat to 100% electric propulsion.  Originally equipped with a 177 HP Chrysler V8 engine, the Riva Ariston had several lives before becoming a 100% electric boat.  The operation consisted in removing this engine, the associated supports and all the equipment related to the heat engine.

The engineering developed for this project has made it possible to expand the range of vintage Riva boats which will soon be electrified. All models are affected.  It is therefore not just a project but a sector that has been launched in Monaco thanks to the continued support of the Government.

The global vision of retrofitting by Lanéva

→ A bespoke electric powertrain for classic and premium boats

→ The retrofit of the most famous classic boats in the world

→ A reversible process with storage of engines and original equipment

What benefits for Monaco ?

→ An impactful message for sustainable yachting in the Principality

→ A strong alliance between heritage, quality of materials, innovation and sustainable development

→ A key communication vector for the development and support of ever more sustainable and innovative mobility in Monaco.

Last but not least, François Richard, Co-founder and CEO of Lanéva is also Ambassador of the Mission for the Energy Transition (MTE) of the Prince’s Government of Monaco. Thanks to this, the whole team is committed to the promotion of best environmental practices in Monaco and elsewhere.